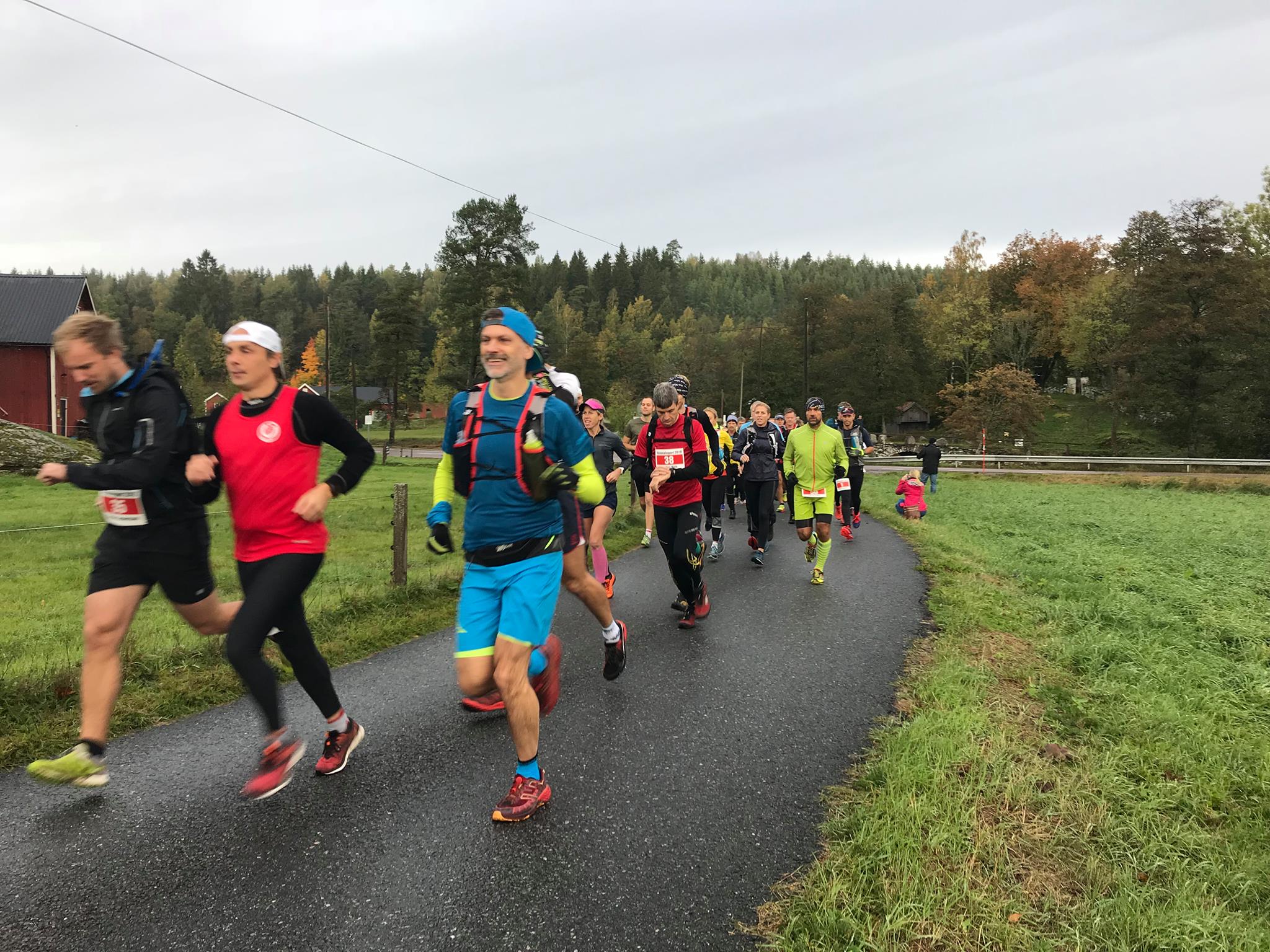 The start of the Hyssnaloppet race - Photo by Henrik Egerbo

I was there, in Hyssna - this lovely spot nearby the city of Gothenburg. The race itself is a 38k loop trail race with approx. 1100 of vert. Not the toughest on the planet, but needs a firm respectful approach due to long gravel roads and nice but technical trail sections that need attention - especially if wet or muddy. And wet it was. It rained during the night so the trails were a little bit wet. But there was no ot quite little mud. So during those first km of the race where you run first on asphalt and after that on gravel road I noticed that the course will be very runable! So already after 500mt my choice was to change my approach and to stick behind those first 10 runners and test myself. I knew that there were really good athletes but whatever.... I knew the course and I wanted/needed a different experience! So what the H..... "Let's go!" - I told to myself. Already during the first climb I noticed that I had another pace on the climbs. I was confident in my legs and everything felt easy.... maybe too easy! - OK, the first idea was to push.....
- Now I added another thing to the race equation - I wanted to run the whole course - no matter what!! I felt great.... and I just saluted the people in that first aid station - Lilla Hålsjön after 8.7km, added some speed in that short downhill and turned to the left into the woods..... GREAT! I felt really good.... that good that I was afraid something really bad might happen (it usually does). These first 18km of the race and especially between the first and the second aid station (17.2km) is a quite technical one with a lot of short climbs and technical parts and in between some speedy gravel sections just to stretch the legs.... Quite perfect! Just before the second aid stations are several climbs where most of the runners hike the climbs - I needed to run! I wanted to run the whole thing! So I did that! Not the best energy usage during the race - not the best race strategy to use such leg-power after 15 of 38km of the race - but I needed to try that too! It went quite well and I managed to continue the run quite well even after those climbs. I felt a little bit "low" running through a few sections where a massive amount of the wood was taken away! That made my heart cry! I was thinking about the horror in the eyes of all the animals living in the forest. And to add to the human equation to that horror is the fact that the "hunting season" was about to start too! I was so happy of my life choices - being plant based and not having eaten any meat from 1988! I don't understand the need to kill animals and to use that as food! Nowadays this seems so unnecessary, barbaric and "stone age" to me! I hope that my life choices, my life evolution as human and the athletic side of the story is going to help somebody to try something else in life.... :) This is another thing people usually ask me... like, how can I endure the long distances, the effort without meat, the proteins, how can I live without proteins, how is that I'm almost never sick, that my recover from races and other events is faster etc. Well, I'm not a biologist, but I have some answers. I could maybe simply answer by saying that my metabolism is fast, that my body uses the energy of my food faster, that I process my food faster and other important things I maybe might talk about in other occasion... So I was there.... dropped the pace a little bit while mind blowing my head with all those "turbulent existential thoughts".... luckily the gravel road came and there was a runner ahead. The hunter in me was trigged right away and I begun the chase. I was there pushing the pace once again and it felt really good....I was just there, running! After the third aid station (23.8km I decided that I would not use any of the aid stations during the race just to add another difficulty level to this race. After the race I noticed that I used just 500ml of the liquids I had with me! Just half a liter in 38km! Crazy indeed. Bu I controlled the "output" during the race and it had a good color and I felt good the whole race - no issues at all! Well, I drank a LOT after the race! :) After 28km the race is getting quite easy so the thing in this race reduces at this point in how smart did you do your homework up to this point. If your energy level is good you have good chances to pick up places running fast in those long gravel sections here. I had nobody behind me and nobody was in front! Alone..... I hate running alone in the woods! I needed to stop twice or three times too in order to ensure that I was on course! Even after 3 races and several training sessions in the area I was not 100% sure that I was on the proper course in a few spots in the race. I guess that I maybe lost a few minutes there... whatever.... My mistake! I need to take care better of the course during the race! No excuses! 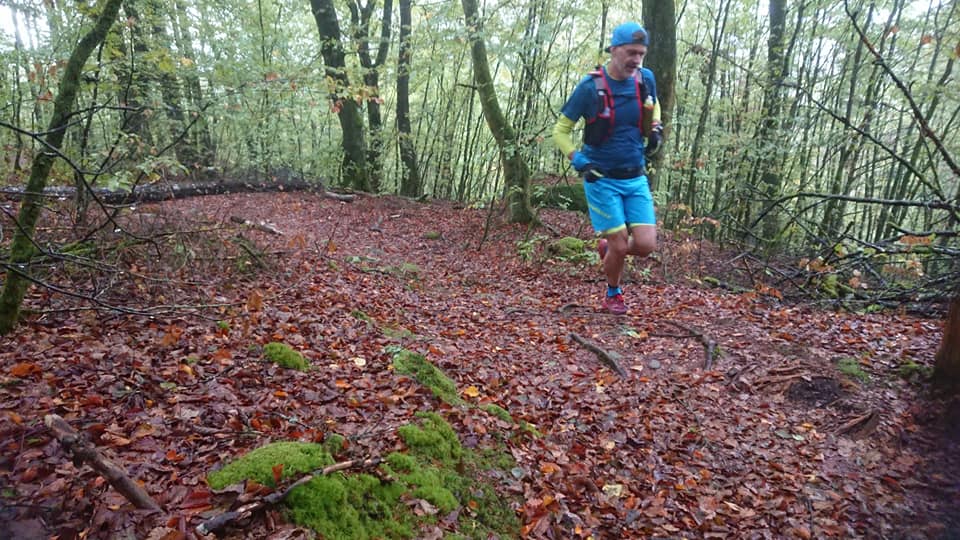 The lovely section in the woods - Photo by Ulrika Persson

The idea of running all the climbs was interesting but tough on some hills. Still, I was pleased that the body performed as I wanted to. I tried to enjoy the flow those miles to the last aid station. Well, that one was really not the last one but I consider that one the last. It's situated in the middle of a climb and I just passed it without stopping, just saluting the children cheering from the top of the hill! Amazing! :) After the top of that hill there is a nice trail heading to that what is considered the fast part of the course. From this point I had to do the math well! Even if Branislav and Carlos told me that they would take things without pushing the pace I knew that they were chasing me.... I felt it! So I kept that nice and steady pace while enjoying the course. I felt confident. Nobody in front and nobody behind my back as long I could see. Great! That last part of the course I felt a little bit that I did something I never did before - I executed everything as planned. Still, I had good energy. I was thinking if I should try to run even harder in future races.... It's maybe something to try on short races like this one. A few km before the end of the race - approx at the km 33 - you cross the road one last time and it's a good thing to be able to enjoy of the lovely surroundings! Amazing nature! I love that part! I finished those last 5k without thinking. I wanted to reach the end and I was really happy with my performance. But before the end there was this runner in front of me. The hunter instinct was triggered and I started the chase. It was kinda nice to push a little bit more after 35km! He stopped but he was ok so I continued running. I was sad that I finished the chase so early.... but hey! He started chasing me now!!! WTF!!! So instants after me chasing the role changed dramatically into... me being chased!! So I pushed a little bit more and I kept the distance. The guy was running strong and I wasn't really sure if I had the necessary power to shake him off.... It was a nice fight. Something you could expect in road races but it was nice after all. We sprinted those last 300mt and finished together! He got me after all! Ehehhehee..... Congrats! ;) This race is really one of my favorites. The people, the nature, the runners.... it's a great day in nature! :) I WILL BE BACK! - Thank You All for an amazing day!!! This is my race on Strava - The profile of the course is not accurate due to the fact that my Suunto watch failed during the race - this is getting really annoying Suunto!!!: 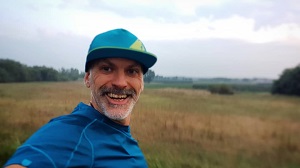 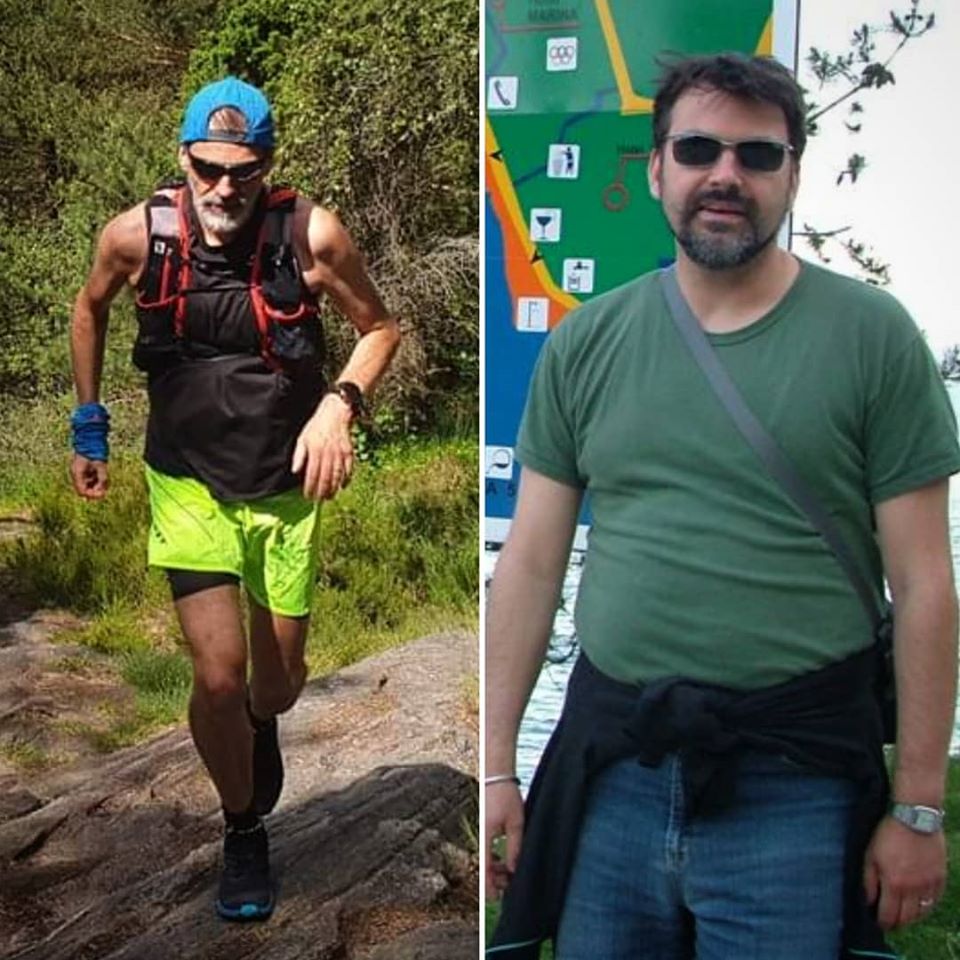